this story has been percolating for a long time & i've finally decided that i'm going to write it, because it's just too bizarre and it wants to be told. and even though it sounds like i've made parts up, i assure you, i do not daydream up stories about such things. 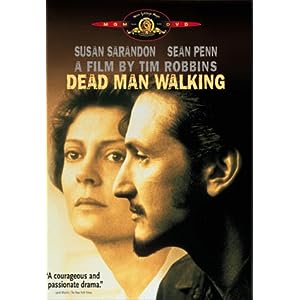 when i was 21 (a lot of my stories seem to have happened around that time. they were sort of my glory days. i did lots of stupid stuff that makes for great story fodder, but i would never want to live it again.) i went to a movie theatre with a girlfriend to see "Dead Man Walking."  if you haven't seen it, there's a link to the trailer, but essentially, it's the story of a convicted murderer on death row & a nun who is his spiritual advisor. it is a sad drama.

the movie had been playing for at least half an hour. there weren't many people in the theatre because it had been out for quite a while and it was a weekday. then a man came in & sat down 3 seats away from me. it seemed odd to me that with all the empty seats in the theatre, he'd chosen to sit with just 2 empty chairs between us. it was also odd that he'd come into the movie so long after it had started. other than thinking those two things, i didn't pay any attention to the man.

a few minutes later, i got the feeling that i was being watched. i glanced over & saw that he was staring at my legs. both myself and my friend were wearing shorts & we had our feet up on the empty seats in front of us and that man was very clearly & openly looking at our legs. i nudged my friend and pointed at him. at that time in our lives, we were used to getting checked out by men, so it didn't strike us as surprising, just tacky to be so obvious about it.

shortly after that, i noticed movement out of the corner of my eye and peeked toward him again. there was movement in the region of his lap. i was elbowing my friend & whispering frantically that i thought the dude was handling himself. she wasn't shy at all about turning to stare straight at him to determine if i was right. and sure enough, he wasn't just handling his business, he had pulled it all the way out.

we were pretty shocked to be sitting in a sad movie in a public theatre and to have a man sitting beside us, spanking his monkey. we didn't know what we should do. we would have had to climb over him to get to the aisle or else climb over a seat to get into a different row and neither of those options seemed good, so we just sat there, unable to even notice what was happening on the big screen because we had our own drama unfolding right in our row.

we started saying "gross!" and "dirty old man" in loud whispers, hoping that would make him leave. it didn't. we put our legs down and tucked them under us so he wouldn't be looking at them anymore, but still he kept up his obviously pleasurable activities. we started hissing out phrases more loudly, like "that's disgusting!" or "put your nasty thing away, no one wants to see that!" it seemed as though our complaining was adding to his enjoyment and before too long, his head was thrown back and his pace increased until it was finally over. then he looked straight at us and grinned, adjusted his pants and left.

we were very relieved when he left. the movie had climaxed along with the man and we were just waiting for it to be finished so we could go out & shriek about what we'd just seen. unfortunately, that's when a different man came in & sat in the same seat that had just been vacated by the first perv. we could hardly believe our eyes when he sat right down, and whipped out his meat wrench with no hesitation or warning and started petting it.

this guy looked nothing like the first guy. they were at least 30 years apart in age, different races and dressed in such a way that they appeared to be from very different socio-economic groups. we couldn't figure out how it could happen once during our movie watching experience, but twice was just too much to comprehend.

we'd had more than enough by then & we started talking loudly & guesturing toward him to try to draw the attention of the others in the theatre. it worked and he didn't stay long before he buttoned up & skeedaddled out of there.

once the movie was over, we carefully stepped over the puddle on the floor in front of the dirty dude's seat & raced out to our car, terrified that we'd be followed. we made it home safely, but were left with a story we can never forget.
Posted by SherilinR at 8/27/2011 02:18:00 PM

don't let me be the only one doing the talking around here. spill your guts!

look, i have followers! (remind me to pay you guys later)

topics i love to write about